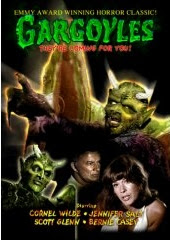 Hey, I like it. It's got cute Jennifer Salt (Sisters) and the late, great Grayson Hall (Dr. Julia Hoffman of Dark Shadows). Gargoyles is not a great classic, but it's worth checking out.
Posted by Thomas at 3:37 AM