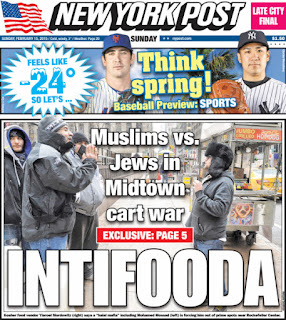 Sometimes it takes a while for reality to catch up to satire. I first wrote Manhattan Sharks as a screenplay in 1987, later turning it into a novel. Nearly 30 years ago.

Manhattan Sharks is a tale of job-hunting and career competition in the "Decade of Greed," from the highest CEOs to the lowliest food cart vendors.

At one point, two characters -- competing food cart vendors -- engage in a food fight over a New York City street corner. At the time I worried that I was being too ... out there. Too wacky and unrealistic. But it seems these things do happen.

A West Side turf battle between two rival food vendors vying for the same street corner turned cutthroat when one of the men slashed the other in the back, police sources said Wednesday.

Mohamed Awad, 39, was charged with felony assault and weapons possession in the Tuesday afternoon confrontation, while his competitor, Eissa Naser, 37, required five stitches. The two men got into argument at 10th Ave. and W. 30th St., each laying claim to station his food cart at that corner. As the dispute became heated, Awad allegedly pulled out a razor, and sliced Naser, who collapsed by a Jolly’s Gyro food cart.

... a group of irate Egyptian competitors block the kosher vendor from setting up on the sidewalk, literally squatting on the curb or placing umbrellas and beverage cartons to cordon off the space

... Licenses granted by the city do not specify where vendors must locate, but the city can force vendors to move for a variety of reasons, including being parked too close to a subway entrance. Intense competition prompts vendors to arrive with their carts by 3 a.m. to claim a spot, with some camping out overnight.

... "The police told these guys that nobody owns the streets. But it sure doesn’t feel that way," said Mr. Di Mille, who called the Midtown North precinct -- not for the first time -- when a jewelry vendor set up shop directly in front of his sales window.

In four weeks of business, the couple has been threatened at the depot where they park the truck; cursed by a gyro vendor who said that he would set their truck on fire; told to stay off every corner in Midtown by ice cream truck drivers; and approached by countless others with advice -- both friendly and menacing -- on how to get along on the streets.

"I want to be a good neighbor," Mr. Di Mille said. "But I am nobody's fool, and nobody's pushover, and I should not have to carry a baseball bat on my truck in order to sell cupcakes."

... Turf wars are nothing new for carts selling kebabs and cheap coffee. But the makers of thumbprint cookies, chicken-Thai basil dumplings, and crème anglaise are not happy about the sharp elbows that are part of the city's sidewalk economy, or the murky bureaucracy that oversees the issuing of permits. (Six people were arrested on Tuesday on fraud charges related to food vending permits.)

Of course, I didn't have Google when I wrote Manhattan Sharks. I thought I was making it all up. But food cart vendors really do battle -- sometimes violently -- over street turf in New York City. Go figure. 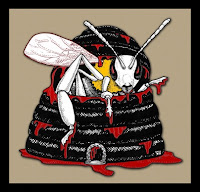