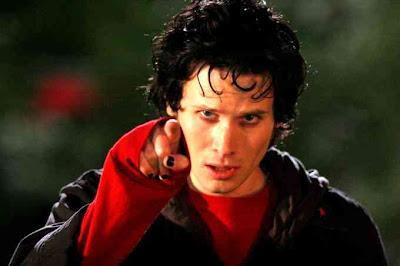 I am surprised that New Line Cinema funded it. Isn't New Line owned by Time-Warner, which, being a huge corporation, owns some theme park interests? (Don't they all?) Didn't anyone consider that this film should hurt roller coaster attendance? (It certainly validates my avoidance of them!)
Posted by Thomas at 4:15 AM

Interesting take...haven't seen the movie yet, but that roller coaster scene must be impressive, as I've seen it mentioned a lot.

I love coasters. But every time I'm about to get on one, I think, this is it. The last long ride down the hill. Something will break and it'll be all over for me.

Yes, it's terror, pure terror I face when I ride a coaster, and when I get off, the relief is palpable.

So why do I like these things? The pop psychologist have had a field day explaining our need to stare down death, but I don't buy it, and I don't think any of them are closer to the truth than you or I. I just do. And you don't. Go figure.