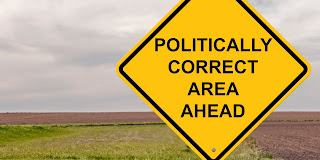 The term "politically correct" is bandied about so much as to have become meaningless. But what really does it mean? Here's a history of the term (as best I know it).

"PC" has gone through four stages of meaning. "Politically correct" was initially coined by Leon Trotsky to refer favorably to those whose views remained in sync with the ever-shifting Bolshevik Party line. This was important, as "not PC" people risked prison or death.

"Politically correct" was revived (and again, used favorably) by 1960s New Left radicals who fancied themselves revolutionaries in the mold of Che, Castro, and Mao.

"Politically correct" was first used negatively by 1980s conservatives, following the publication of Allan Bloom's Closing of the American Mind. Conservatives embraced the term "politically incorrect" as a badge of honor to contrast their championing of free speech against campus leftists who used speech codes to suppress debate on sensitive topics. This was also when the term first became widely known by its acronym, "PC."

In these three previous stages, everyone agreed that PC meant Left, and "not PC" meant Right. But because liberals don't like a reputation of being anti-free speech, within a few years they did a turnabout, and called their opponents "PC" and themselves "not PC." Bill Maher's Politically Incorrect is representative of this fourth stage, creating the odd result of a self-proclaimed "not PC" show winning a very PC environmental media award.

However, despite liberals' turnabout, conservatives continued to refer to themselves too as "not PC." Thus "PC" has lost any specific meaning in this fourth stage, since everyone defines their position as the now chic "not PC," and their opponents as "PC." (A far cry from the days when Russians dreaded the Chekists who executed "not PC" people.)