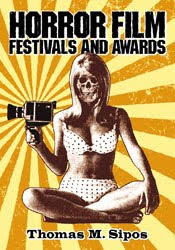 Either way, Horror Film Festivals and Awards should be available for purchase by late 2011.
Posted by Thomas at 10:37 AM

the year 2001 should not be repeated