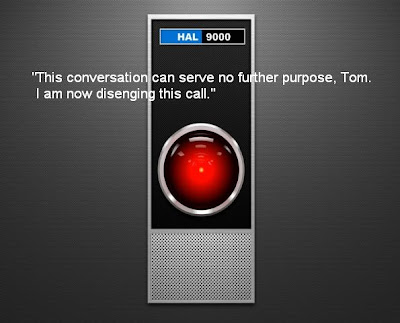 Since both Lenovo and the HAL 9000 have roots in IBM (even if unintentional), this seems appropriate.
Posted by Thomas at 8:19 AM

Sorry to hear that you didn't have a positive experience - it sounds like this could have been handled more politely at the least. Unfortunately, phone support is now only available for in-warranty customers, although some fee based support offerings are being considered.

All files available for download, including bios are available from the support site at www.lenovo.com/support

Another good resources to get some assistance would be lenovo's forum at http://forums.lenovo.com or a third party enthusiast forum, http://forum.thinkpads.com

In some ways, I'll recommend the ThinkPad forum because many of the members there are actively working with T40's, T42, T43 vintage systems and have been through what you are trying to do. I suspect by posting there, you would get some great advice from others who have been down the same road.


Just don't buy Lenovo Thinkpad generally! Lenovo 'Thinkpad's are not IBM Thinkpads; my experience is they last well for 2 years then they are just well-built junk once something important breaks. They are inferior to the IBM thinkpads from years ago. Other laptops I've had last 5 years (ok not as good build quality - but work longer). Oh and as you see the support is legendary (bad)!